History of Unitarianism in Dundee

In 1781 Mr William Christie founded a congregation in Montrose that was secondly avowedly Unitarian congregation in the English speaking world. This closed in 1794 but had already led to the foundation of the Dundee Church in 1785 when the Rev Thomas Fyshe Palmer, an Old Etonian, came to the city, though there may have been some meetings prior to his arrival. It was the third avowedly Unitarian Church to be opened in the English speaking world.

Fyshe Palmer travelled widely in Scotland preaching Unitarianism. He appears to have been swept up in the general reaction against the French Revolution and was sentenced, in 1793, to seven years transportation to Botany Bay for supporting the principles of ‘Liberty, Equality and Brotherhood’. Following the seven years he travelled in New Zealand and the South Seas and died on Guam in 1802. A Memorial to him can found in the Old Calton Burial Ground in Edinburgh as he became known as one of the ‘Five Scottish Martyrs for Political Freedom’.

Fyshe Palmer’s congregation had met in a private house in Dundee. The congregation continued to survive through the life-long loyalty of Robert Millar, a Dundee merchant who continued a lengthy correspondence with Theophilus Lindsay, the great Unitarian Minister in London. Millar was followed by George Speed, another local businessman, who preached and held services in private thereby keeping the congregation alive until 1862.

At this point Unitarianism in Dundee seemed doomed until the arrival of the Rev Henry Williamson in 1866. Williamson had grown up in Godalming, Surrey in a Unitarian family. He emigrated to America in 1857 and served his time as a carpenter where he encountered Universalism and this led him to become a Minister. He studied theology in Manchester from 1863 to 1866 and first visited Dundee in the autumn of 1865. He became Minister in 1866 and stayed to his death in 1925. By 1870 he had raised enough money to build a church. George Speed lived just long enough to see it opened.

Williamson was involved in a large number of enterprises across Dundee and started the first trade union to support jute mill operatives—girls and young women. He was greatly involved in a number of educational projects for all sectors of the community. He was honoured by city for his public work. 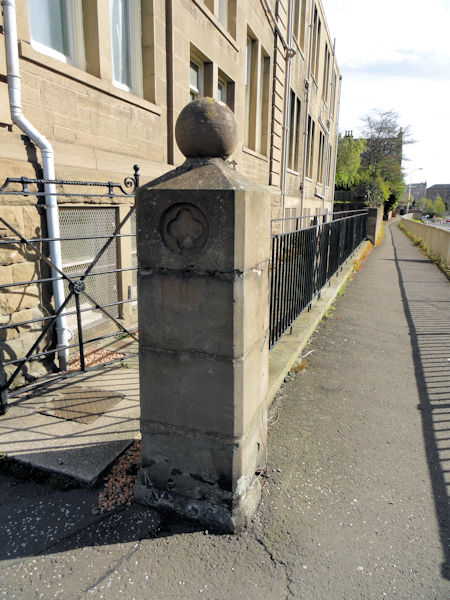 The old church demolished as part of construction of the new Inner Ring road and replaced with the current building which opened on Saturday 13 December 1969.

Within Tayside there were a number of small and short lived congregations—some had church buildings but there is little evidence of them today. One notable example is the Perth church which had a profound influence on the situation at Dundee even though it remained in existence for only four years from 1876 to 1880. Mr David Jobson was returning to the city after taking a service at Perth when he died in the Tay Bridge Calamity of Sunday 28 December 1879. This event deprived Dundee of one of its most active and influential laymen, yet it secured the church in its possession of the ground on which it then stood. 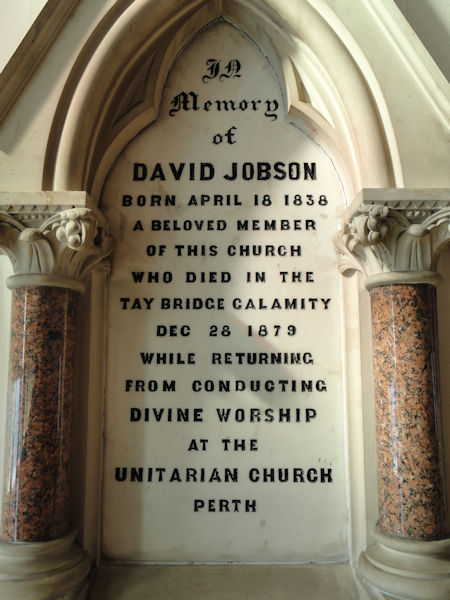 In memory of David Jobson (born April 18 1838) a beloved member of this church who died in the Tay Bridge Calamity Dec 28 1879 while returning from conducting divine worship at the Unitarian Church, Perth

A history of Williamson Memorial Church, from 1963

The roots of the Unitarianism lie principally in the Protestant Reformation of the 16th century. At that time, people in many countries across Europe began to claim

Many came to question ‘orthodox’ Christian doctrine and to affirm beliefs of their own. These included:

The earliest organised Unitarian movements were founded in the 16th century in Poland and Transylvania.

In Britain, a number of early radical reformers professed Unitarian beliefs in the 16th and 17th centuries, some suffering imprisonment and martyrdom.  An organised Unitarianism did not emerge in Britain until the late 18th century. The first Unitarian church in Britain was opened in Essex Street, London, in 1774, the second in Montrose.

Denominational structures were developed during the 19th century, finally uniting in the present General Assembly in 1928.

Today Unitarianism exists in a number of countries around the world. Most originated independently by processes of spiritual evolution similar to that which occurred in Britain.